God of War 4 Plot: Chapter 14. Going to the realm where is the boundary between the realms. Kratos and Atreus successfully restore the temple of Jotunheim. Thereby keeping the hope of moving to the land of the Giants not extinguished.

When the temple of Jotunheim in Midgard is restored. Kratos and his son can use the Travel Room to teleport to the land of the Giants. However, when using the teleport mark to activate the Bifrost Bridge, the room tensioner becomes inactive.

They realize that a Biforst stone is still missing to power the connection between Midgard and Jotunheim. Mimir says that he can use his eyes (also made of Biforst by the Giant) to replace the base stone. However, Mimir now only has one eye left. 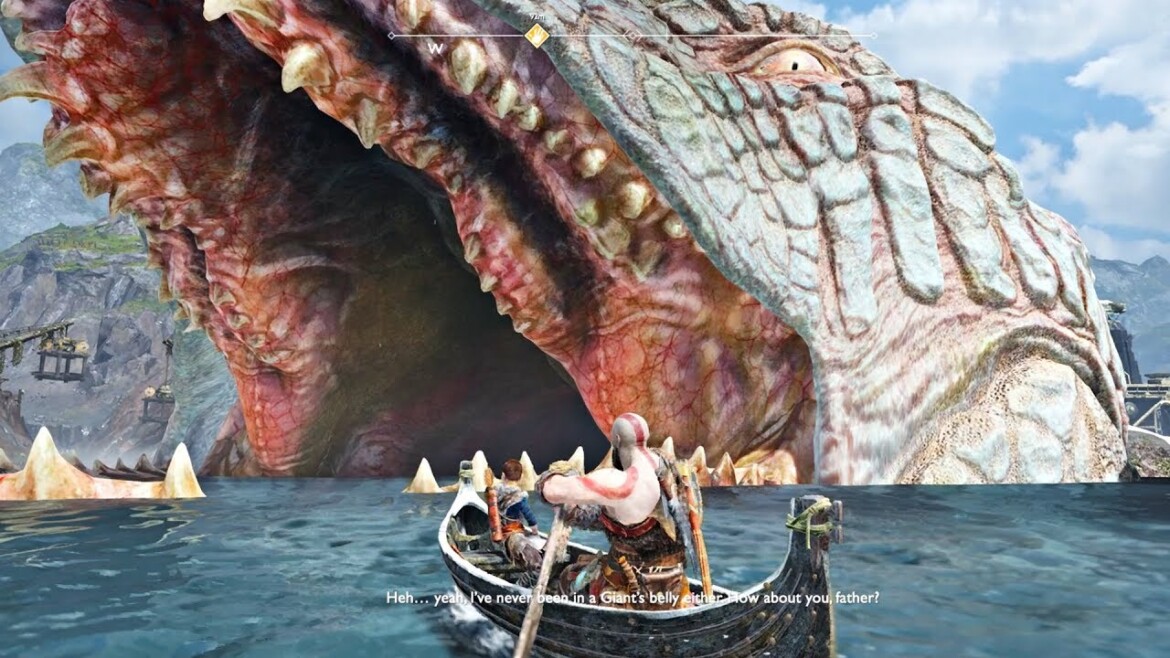 Coming inside Jormungandr
So they had to go back to meet the blacksmith brothers Brok and Sindri to ask about the whereabouts of Mimir’s remaining eye. Because according to him, Odin once asked them to create the treasures as well as the secret hiding place of the Allfather.

Returning to the area of the Dwarves, neither Brok nor Sindri could know exactly where Odin used to hide Mimir’s remaining eye. However, Brok said, Allfather asked him to build a secret area inside the statue of Thor in the Nine of Lake. The statue had been destroyed by the World Serpent before when Mimir first called Jormungandr.

At the same time, Atreus also apologized for his words that had hurt Sindri earlier. The boy also realizes that he needs to learn more to become a strong and brave man like his father.

When love is blinded by hate​

Go to the place they used to call Jormungandr. Mimir told the World Serpent about his intention to find the eye. Understanding that, Jormungandr opened his mouth so that Kratos and his son could enter its belly in the hope of finding the place where Mimir’s eye was hidden. And luckily, they found Mimir’s remaining eye inside a storage container inside Jormungandr’s stomach.

The moment Baldur’s immortal curse resolved
When they were about to come back out, Jormungandr was now attacked by something unexpected that caused him to lose control and spit Kratos and Atreus out of his mouth and fall straight into the area. Where Thamur’s icy body lay.

At this moment, Freya suddenly appeared because she felt the forests and animals calling her son’s name. This leads her to believe that Baldur is in Midgar. But now Kratos feels suspicious about Freya, so the two seem shy when the goddess approaches. Before he could ask more about what Freya was hiding from Kratos, at this moment Baldur appeared. He stepped out of the cold water with a confident attitude.

Freya is happy to see her son after years of being confined in Midgard. She tries to convince Baldur that she will make up for her past mistakes. However, in exchange for only Baldur’s disdain, it only made him more bloodthirsty and determined to kill Freya because we know that is what he regrets most through the visions he saw in Helheim.

The battle cannot be avoided​

Although this is not Kratos’s business. The God of War still tries to advise Baldur that the path he is taking will not bring peace. However, the hatred in Baldur has grown and this makes him unable to give up his intention to kill his mother.

Unable to do anything more, Kratos is forced to fight Baldur to stop this curse from continuing.

The fight begins, and Freya is forced to watch the two fight because Odin’s curse cannot harm living things. However, she manages to stop them both by using magic to keep them both from moving.

Because of that, Kratos was controlled, and this caused Atreus to stand up to protect his father while Baldur rushed to punch the boy directly. It was at this moment that the arrowhead made of Mistletoe that Kratos had planted on Atreus’ chest pierced Baldur’s arm. In the end, Freya’s immortal magic cast on Baldur was nullified.

READ MORE
THE LAST OF US FAN IMAGINES IF GOD OF WAR’S KRATOS RAISED ELLIE
Click to expand...

At that moment, the God of Light rejoiced, for he could now feel everything, temperature, pain, and wounds affecting his body. Life returned to the one cursed by immortality as Baldur.

The end of a tragedy​

Although the curse was lifted, Baldur did not stop, he continued to attack Kratos to enjoy the life he pursued. At this point, Freya must use magic to control Thamur’s body to prevent a fight between the two. Besides begging his son and God of War to stop fighting.

Kratos tried to end the cycle
The battle was fierce, the wounds inflicted by Kratos and Atreus on Baldur increased more and more. For Baldur, however, it was joy, and he enjoyed every second of fighting Kratos.

But with a body no longer protected by invulnerability. Baldur gradually lost his strength and was unable to withstand the onslaught of Kratos and Atreus. And in the end, Baldur had to fall before the great power that he had never been able to win before when fighting the god from Greece.

Baldur death
Just as he was about to finish Baldur, Atreus approached and reminded Kratos of what he had been taught by the God of War about the consequences of killing a god. That Baldur had been defeated and was no longer a threat. But to make sure Kratos asked him to not chase after his father and son but touch Freya and leave. In return, however, Baldur stood up and approached his mother, and reached out his hand to strangle Freya.

Accepting death gently with loving eyes, Freya hopes that her son will feel at peace with his death. But from behind, Kratos rushed forward to push Freya away and strangle Baldur before ending the pathetic life of the god of light.

Everything went dark, and the last beautiful thing Baldur could feel was the melting snowflakes on his body before he died.